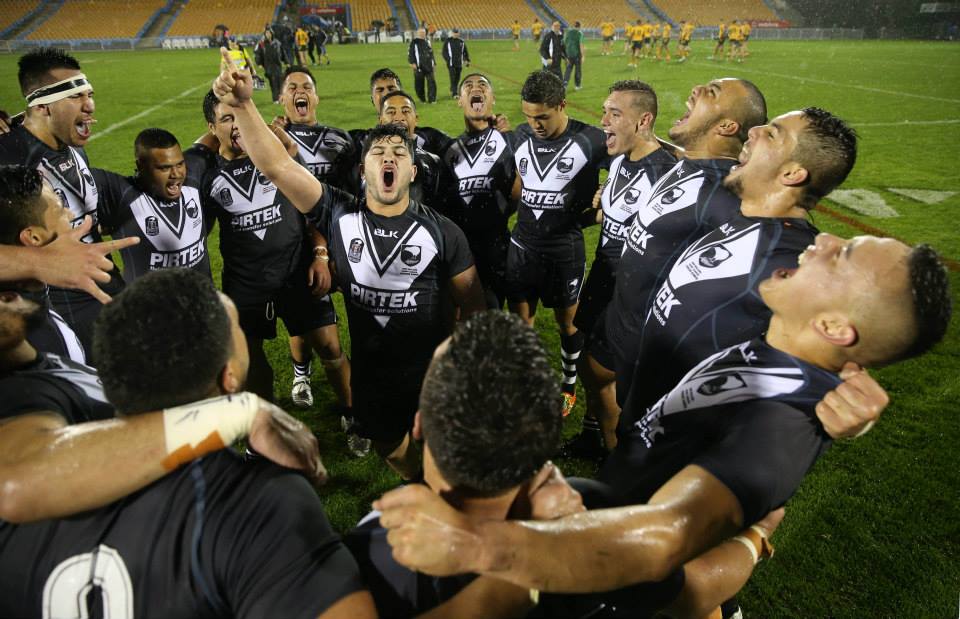 By Asia Pacific Rugby LeagueOctober 18, 2014October 23rd, 2014No Comments
The Junior Kiwis have overcome a highly-rated and experienced Junior Kangaroos side to win their first trans-Tasman test in three years, running out 15-14 winners at Mount Smart Stadium on Saturday night.
A dramatic opening to the match, which saw the young Australians advance on the pre-match haka in scenes reminiscent of the 2008 World Cup Final, flowed right through until after the final siren as the Kangaroos fell metres short of nailing a game-winning penalty.
New Zealand looked to have the game won following a 79th-minute field goal from five-eighth Te Maire Martin gave them a 15-14 lead. But with the siren sounding in the background the drama was far from over.
Kangaroos halfback Ryan Matterson was ruled to have been collected late by Junior Warriors captain Sam Lisone on a final field goal attempt, setting up a 40-metre penalty shot for Clinton Gutherson to win the game.
To a chorus of boos from the small but vocal Kiwi crowd Gutherson pushed the kick to the left, ensuring the Junior Kiwis collected their first win since 2011.
Despite boasting only one player with NRL experience compared to the Junior Kangaroos’ seven, the New Zealanders were able to better control possession throughout the contest.
The visitors were first to post points – ironically through Cronulla Sharks winger Valentine Holmes who was named in the Kiwis train-on squad this year and was involved with the Junior Kiwis in 2013 before declaring his allegiance to the green and gold. Gutherson converted from mid-range for an early 6-0 lead.
Auckland had been pelted by rain heading into the match and the greasy conditions made for some sluggish play over the next 14 minutes as both sides struggled to do anything with the ball in hand.
Eventually it was an aggressive New Zealand kick chase that created the chance for them to get on the board after they trapped Gutherson in goal and forced a wayward pass from the Manly star.
On the ensuing set winger Watson Heleta scored in the left corner, but the Kiwis still trailed 6-4 after the Zach Dockar-Clay conversion attempt sailed wide.
The hosts had well and truly wrestled back momentum by the time they crossed again in the 29th minute through Chance Peni, although they were lucky not to have it called back for what looked to be a clear forward pass.
The Kiwis blew their chance to take a lead into the sheds, conceding a penalty deep inside their own half before getting caught short on their left-edge where Newcastle’s Jake Mamo crossed to make it 10-all.
After trading blows to start the second half – New Zealand fullback Kodi Nikorima going over first before Holmes collected his double on 54 minutes – handling errors and penalties started to creep in for both sides.
The closest thing to a try in the final 25 minutes came when Heleta was held up over the line by some desperate Australian cover with nine to go, before the game came to life in the final two minutes.
The Junior Kangaroos could feel a little hard done by after being on the receiving end of some tough calls, while the Junior Kiwis would be relieved to have avenged last year’s 38-26 loss in the corresponding clash.
Junior Kiwis 15 (Heleta, Peni, Nikorima tries; Dockar-Clay goal; Martin field goal)def. Junior Kangaroos 14 (Holmes 2, Mamo tries; Gutherson 1 goal) at Mount Smart Stadium.